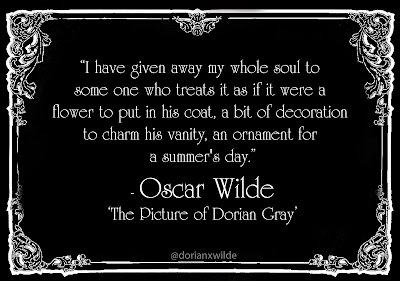 I'd like to make this a regular feature on my blog but I don't blog regularly so, I suppose, that would make it relatively a matter of perspective as to how "regular" it is.  It feels apropos to dedicate some time to the inclusion of Oscar Wilde's influence on my own work as he is singly the most pivotal of all my inspirations.  In many ways, he is my muse in both my creativity and personal existential exploration which are incorporated themes in my books.  It's important to me to spread awareness of his life and work and also to carry on the spirit of his ideas and writings.  Thus, I've also become a member of the Oscar Wilde Society in support of precisely that endeavor.

My books are not intended as an echo or mimic.  They are uniquely their own.  They have their own voice and say the things about life and existence that I personally wish to be said.  They deal with a multitude of different topics.  They are, essentially, my own personal revelations shared with the world in the only way in which I feel comfortable being entirely honest and raw with my audience.  I simply enjoy employing the paranormal to help me do that.

That being said, and having had some readers request it, I would love to take time now and again to delve deeper into the ways in which Oscar's work has played its role in shaping the stories that I enjoy writing most.  Think of this as an occasional pit stop of analysis on dissecting my own work with a Wildean filter.

I felt that, with the upcoming Kindle release of The Revelation of Dacey Sinnett, this quote was a great place to begin.  (I can't cover all the ground in one post.  I will simply tackle one angle at a time; which is why a series of blog posts over time makes the most sense.)  Firstly, because The Picture of Dorian Gray is my favorite book.  Secondly, but most importantly, because the sentiment plays heavily into the way that I threaded the relationship that exists between Dacey Sinnett and Marcus von Rottal.  I'll try my best to expound upon this without revealing too many spoilers. 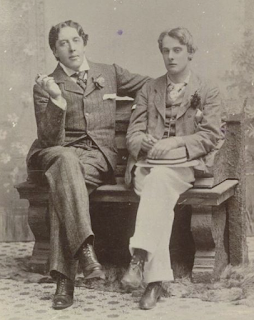 In a sense, there is a bit of Dorian Gray in both Dacey and Marcus.  I would say Dacey better represents the earlier Dorian (though much less innocent) and Marcus the darker version he becomes by the end of the story.  Essentially, they are two men that land on the same path, engage in the same vices, but still manage to retain their own personalities and convictions (Though, they are always magnetically drawn together despite their better judgement.).

This is where the quote and Wilde's personal life begin to weave together in my reinterpretation of an interpersonal dynamic that ultimately forms the, more tragic, basis of my vampires' relationship with one another.

Right now, Wildeans are having an "Aha!" moment.  If this isn't you then, for the sake of not spoiling anything, I will only say to please take some time one afternoon, evening, or preferably night (Night research is always the best, don't you agree?), to look into the history of Oscar Wilde and Lord Alfred 'Bosie' Douglas.  In this regard, the similarities might guide the reader into seeing a parallel of Dacey being like Oscar and Marcus more like Bosie.  Although, it should be noted, there is no definitive outline or boundary for this and both characters are indubitably their own personalities.

Neither were purposefully modeled directly with Oscar or Bosie in mind.  Rather, they were born of the idea of splitting apart who Dorian Gray became and the man he originally was and setting both characteristics against the same obstacles.  The Oscar/Bosie correlation was something that came to me after I'd already outlined the book but then I felt as though it were staring me right in face.  A nuance that I hand't necessarily planned initially but that couldn't be denied once I saw it coming to life in their interactions.

As I stated earlier, my stories are not complete homages to Wilde but he definitely has his place on the color wheel of inspiration that's constantly spinning in my mind while I create.  My favorite muse, indeed.

I hope you enjoyed this feature!  If you have any questions or would just like to discuss this topic further then please feel free to talk to me on Twitter or submit a query on my Goodreads Author Page (that way other readers can get involved).

Also, if you're a fellow Wildean and would like to join the Oscar Wilde Society then please visit their page through the link on my sidebar.