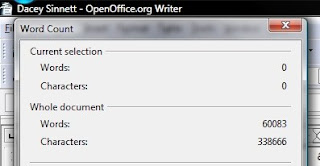 A little update on the progress of 'The Revelation of Dacey Sinnett'.  I'm now 3K words away from reaching the length of 'ROAM'!  When I'd outlined the story originally, I hadn't realized that it would end up being longer in the end but as I'm just beginning the last third of the book it is quite obvious that will be the case.  I'm not sure how many prequels are longer than the original but there was a lot of ground to cover.  Over a hundred years worth of material to be precise.  Vampires.  :)

I'm excited to enter the last act of the book because everything will now start tieing in more directly with the events in 'ROAM'.  Some characters will even have cameos which I'm very much looking forward to writing.

As I come closer to finishing this book, I've begun to work on the beginning process of executive decisions and outlining for my next book (which is the sequel to 'ROAM').  After a lot of thought, I'm leaning toward taking a different approach with the release of it.

First of all, I should say that, yes, I do plan on releasing 'The Revelation of Dacey Sinnett' for Kindle as I did with 'ROAM'.  A lot of people don't use Wattpad and prefer to just download the story to their devices. (Also, the versions on Wattpad are the first drafts.  I edit, refine, and finalize them before placing on Kindle.)  Plus, as an author it makes sense for me to do that as purchases allow me to continue progressing forward with my writing goals.

I don't want to change things too drastically for readers with this series.  I appreciate all of the support and enthusiasm that you've had.  So, as long as I write 'ROAM' stories (and self-publish), I will publish them on Wattpad.  The difference that I'm considering is this:  Instead of releasing the sequel chapter-by-chapter as I write them, I will instead write the entire book and then put it up on Wattpad and Kindle at the same time.  On Wattpad I will release two chapters a week or you can just download it in full on Kindle.  I think this process works out better for everyone.  Chapter releases will be on a consistent schedule that way and those who prefer to get the whole story at once will have that option instead of having to wait and read a chapter at a time over the course of many months.

Let me know what you think, though.  I will definitely consider any advice on the subject but I belive this is the best direction to go with the next book in the series.

Thanks again for all of your support!  And if you're a 'Dacey' reader, be ready, someone very close to Ethan Roam will be making an appearance soon.  :)

Your Dapper Friend,
-Dez Schwartz-
Posted by Dez Schwartz at 6:42 AM No comments:

If you know me in person or if you've been following me online for a while then you already know what a huge Oscar Wilde fan I am.  You probably also know that 'The Picture of Dorian Gray' is my favorite book.  There are a handful of Dorian Gray films to date and I thought it would be fun to share my thoughts on the pros and cons of each.  This week, I'd like to begin with the 2009 version to start out a new series of film reviews titled 'Creature Feature' in which I assess various "gothic" films and monster movies.  So, let's begin!

5 Thoughts On This Film:

Typically, if Colin Firth is in a movie then you're probably going to enjoy it.  This fact holds true with this film.  I honestly can't imagine a better Lord Henry Wotton.  The casting of Ben Barnes is especially interesting to me because I can't seem to overlook the similarities to a young Oscar Wilde himself more so than casting to fit the description of Dorian Gray.  I'm not sure if this was intentional or if I'm alone in this but I definitely found it pleasing.  That being said, Ben Barnes is phenomenal in this role.  He definitely shines in this film and has won me over as a fan.  I'd also like to mention that Ben Chaplin's performance as Basil Hallward is so passionate and true to the character that it made my fangirl heart soar.  Basil Hallward is one of the few fictional characters in literature that I actually identify on a deep level with and so I was very happy that Chaplin did him such great honor.  I would be remiss to leave out Fiona Shaw.  Her performance as Agatha is also a highlight.

Yes, as a book lover you have to acknowledge the fact that it has its "That wasn't how it happened in the book!" moments.  However, and this is coming from someone who truly loves this story dearly, I think those creative flourishes can be forgiven.  Overall, I feel it strays only to make the story more adaptable to the screen.  The book allows you to really see things from Dorian's perspective but transforming that visually could prove difficult; so, Toby Finlay took some liberties by adding new characters and altering situations to highlight the progressions of Dorian's character and examine the destruction to those associated with him.  I don't feel like these variations take away from the nature of the story and, in fact, I feel that as a whole the film stays very true to the tone and heart of the book.  I love that a lot of the original dialogue was also used.

Dorian Gray was a progressive character of his time for a number of reasons, not least of all being his sexuality.  Most accept that he was bisexual and some, including myself, insist he was actually omnisexual.  It's very important to me that this fact isn't left out or shied away from when he's portrayed.  (What would be the point in making a film about Dorian Gray if you're not going to let him be Dorian Gray?) I'm extremely thankful that they embraced it fully in this film.  I'm also happy that they took the time to depict Basil's feelings toward Dorian.  Dorian's sexuality is built upon ego but Basil's is sincere and heartfelt.  Their dynamic is definitely one of my favorite things about the story.

It's the quintessential Victorian Gothic film and I mean that in the best way.  The entire movie is, fittingly, a work of art.  Every scene is carefully constructed from the sets to the direction of the actor's movements to be visually stunning.  This film is definitely in my rotation of movies that I'll just casually have on in the background while I work on creative projects.

This isn't a film that was made to cash in on the popularity of gothic literature.  This is a film about (for so many of us) a beloved novel made by Wildean enthusiasts for Wildean enthusiasts.  I am aware that there are some fans that really dislike this film.  I'm going to hazard a guess that it's because of the addition of certain characters (namely Emily) that vary from the original story.  However, I stand by my assessment that overall the movie does great honor to the nature of Dorian Gray's character and I'm happy that this film exists.

Have you seen this film?  What did you think about it?  If not, then I hope this review inspires you to give it a chance.  It's definitely worth two hours of your time and many more, if like myself, you find yourself watching it again and again.

Posted by Dez Schwartz at 5:37 PM No comments: