For this week's Music Monday, I'd like to spotlight a song that played an integral part in the creation of a specific character of mine - Marcus von Rottal.

Marcus doesn't come into 'ROAM' until very late in the game and there's a reason for that. He didn't exist in my mind at all until then! I had done a lot of forward planning when it came to Ethan & Grady and their backgrounds and such but the supporting characters were still a work-in-progess. As I wrote Dacey's character, though, I quickly realized that his personality certainly didn't support solitude and while he enjoyed his trysts the fact of the matter is there would have been, at some point, someone very close to him. Maybe even who had helped shape him into the person that he is now. That's the point of origin from which the idea for Marcus developed.

Then 'Possum Kingdom' happened. I've always really liked this song. It has a raw, macabre, emotional, in-your-face nature to it. I was waiting in a Coliseum parking lot, thinking about the next chapter of my book when this song came on the radio and as I listened to it things just clicked together. I suddenly knew exactly who Marcus was and what all of his motivations were. The song definitely represents the way he feels about Dacey and his own wild nature. He is a vampire, after all, and exceedingly self-indulgent & ruthless. As you see in 'The Revelation of Dacey Sinnett', Dacey is in fact the only thing that he is truly passionate about and not always in the best of ways.

There are other songs that helped inspire the storyline for the 'Dacey' book but I'll touch on those in the future. For the most part this song (and to be honest, 'Killing Strangers' by Marilyn Manson) was the main musical influence in the creation of Marcus.

Before I close, I'd like to mention the Poll Results from last week! It looks like Dacey Sinnett will be the character that gets to be interviewed by readers, and ANYTHING goes! So, think up some good questions and submit them in the comments or through my social media. Seriously, anything you want to ask him! He's a good sport. :)

Posted by Dez Schwartz at 8:22 AM No comments:

A huge part of my creative process is listening to music. Either as a way to get me into the mood of a scene that I'm writing or as inspiration for certain characters and storylines. There have been many times when I've heard a song and thought, "Oh, that's definitely a Grady song." or even heard certain lyrics that sparked an idea for where I want a plot point to go.

So, I thought it would be fun to include a 'Music Monday' feature here to share some of the songs that have had a lot of influence in my stories or the creation of certain characters.

The first song I'd like to share is 'The Killing Moon' by Echo & The Bunnymen. I'm aware this song has actually influenced a lot of great stories/films (most notably, 'Donnie Darko') and it was most assuredly a huge inspiration for me. The mood of the song sets a great tone and the lyrics speak for themselves. It's also the most obvious of my inspirations as it's actually referenced in a subtle way in 'ROAM'.

This song spoke to me for two reasons. One: The idea of Ethan facing his destiny and, Two: The depth of emotion in the vocals, I feel, matches Ethan's emotions as he struggles with who he is and the way that Grady makes him feel.

I love this song so much. It's definitely one of my favorite 80's tunes and I hope you enjoy it as well!

Posted by Dez Schwartz at 8:33 AM No comments:

Book Giveaway on Whimsy and Noir 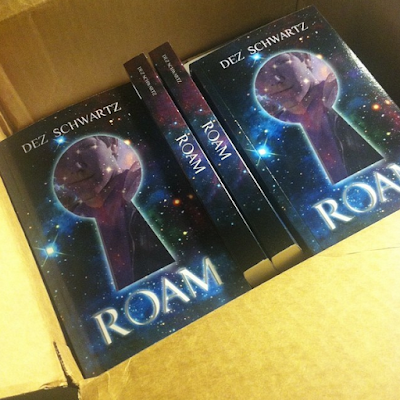 This week, I teamed up with Whimsy & Noir for a fun giveaway!  There are two days left to enter to win a signed paperback copy of 'ROAM', so be sure to head over there and throw your hat (top hat, bowler, cabbie, whatever hat preference you have) in the ring.  If you follow me on social media then  you're already halfway there; you just need to claim it on the blog.  There are multiple options for entering so check it out & good luck!

Also, the Blogger gods seem to be against me today and the Poll gadget isn't working.  I'm planning on doing a post in the near future that will be an interview format for one of my characters where you, the readers, can ask questions!  I think it will be a fun feature and I'm trying to determine which character should get the honor.  SO, since Blogger is having issues, I've pinned the poll on my Twitter account which you can access HERE.

OR, feel free to write in a vote in the comments below or through any of my social media.

Thanks so much & I look forward to seeing who you all choose!

The Beginning Is, After All, The Best Place To Start 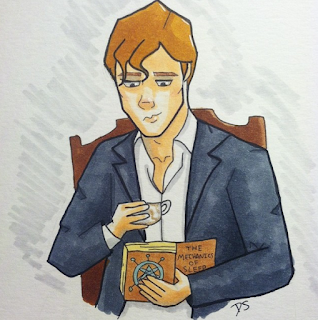 I decided to create this space to serve as a supplement to my books.  Here you will find news, illustrations, and behind-the-scenes features of my work.  One feature that I'm really excited about (but will be a continuous work in progress) is a Character Compendium.  I will attempt to organize the massive collection of characters from my stories with background information, etc.  So, if you'd ever like a quick reference (or even a sneak peek at newer characters) then you'll have an easy place to access information on them quickly.

Feel free to click around for now while I work on getting everything set up!  I think it's all pretty straightforward and I look forward to sharing some of my creative processes with you soon!  I'm also thinking it might be fun to have a post written by one of my characters from time to time.  Maybe even interview style where readers can ask them questions?  We'll see how that goes.  ;)

Thank you for stopping by!
~ Dez

Posted by Dez Schwartz at 8:28 AM No comments: