Hollywood To Horses - OUT NOW! 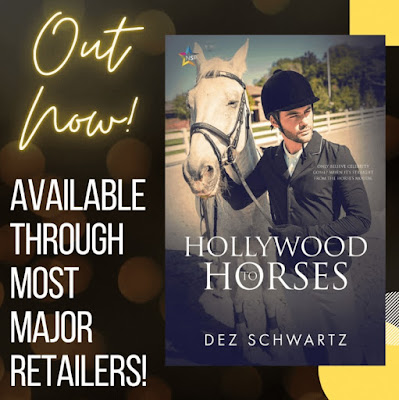 It's finally here!! "Hollywood To Horses" is now available through most major retailers!

GET YOUR COPY HERE!

I'm so excited for you all to meet Mateo & Christopher in this MM Contemporary Rom-Com!

Mateo Harris, a retired Olympic Show Jumper, achieved just about everything he could want in life. Rising from a nobody to becoming a beloved gold-medalist, co-owning H&H Riding Academy with his cousin—and best friend—Emily Hall, and he’s one of the most powerful and respected men in his hometown of Sweetspire, VA. Nothing can shake the foundations of the life he’s built for himself. That is until he hears his nemesis and former crush, Christopher Wright II, has moved back to town.

Christopher, a runaway movie star, has returned to Sweetspire to inherit the family business: Wright Stables, the only rival riding academy Mateo has ever had to worry about. With Christopher’s charm, talent, and fame taking charge, Mateo is faced with real competition both in and out of the arena. He’ll have to be at the top of his game to prove he’s still the number one equestrian in town, but every encounter with Christopher becomes as challenging as any obstacle he’s faced on horseback.