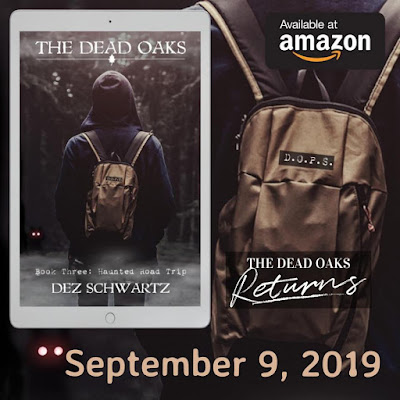 The Dead Oaks returns in less than two weeks!  Here's an exclusive excerpt from the first chapter of the new book, Haunted Road Trip:

“It's always so loud in here!”
Jasper wasn't opposed to live music. Not at all. He loved that he'd reached a point where his nights could be spent hanging out with friends at Neon Flux instead of just binge eating junk food and streaming movies online; not that he was opposed to that either. It was just nice to finally have friends.
But at the moment, Wes attempted to shout at him from across the table. They were crowded into a corner booth with Liv Robles, Caroline Strathers, Pheobe Tống, and Martin Chopra. Between the din of guitars and drums pounding out an obscure sub-genre of heavy metal that reminded Jasper of his cat, Zener, screaming for canned whitefish, and the cheers of the crowd, Jasper had no idea what on earth Wes was trying to say.
Exasperated, Wes kicked Jasper's foot underneath the table and motioned for them to leave.
Jasper nudged Pheobe and Martin who had no qualms letting him out of the booth. They took the opportunity to hit the dance floor and bust some seriously embarrassing moves which Jasper was thankful he wouldn't have to witness.
Wes grabbed his energy drink off the table in one hand and took Jasper's in the other. As soon as he was in earshot, he shouted, “Let's go outside!”
Jasper didn't want to blow out his vocal chords so he simply nodded and followed behind Wes as they pushed their way through the crowd and out the front door.
Even though the night air was warm, it still provided a nice reprieve from the heat of bodies building up inside of Neon Flux.
They walked to the side of the building where broken bricks jutted out and Wes hopped onto them like a makeshift bench. Jasper opted to lean against the building so they were eye level with one another.
Wes swept his loose black hair back out of his face and let the night breeze cool him off.
“Remember when I suggested we should go on a trip together this summer?” Wes took a sip from the can and provided Jasper time to recall the event as though it was on offer he'd easily forget.
Jasper's heart leaped but he didn't want to seem too overzealous. He tried his best to mask his excitement. “Are you finally ready?”
“More than ready!” Wes grinned so big his smile practically filled his entire face. “I've got it all planned out. All you have to do is pack your things.”
Jasper relaxed and let himself be thrilled. “Awesome! Where are we going?”
He had daydreamed a few times about where they'd take their first romantic getaway. He often pictured them on a beach; which was definitely a fantasy because he'd never actually been to the ocean before. He wondered how soon he'd need to be ready because he still needed to buy some new swim trunks.
“On a haunted road trip!” Wes proclaimed. His eyes lit up at the exact same moment Jasper's clouded with confusion.
“What is it, JJ? Not what you expected?” As always, Wes could see right through him.
“I maybe imagined something with a little more sand and sunsets.”
“Sex on the beach?” Wes raised an inquisitive eyebrow and offered a wicked smirk.
Heat immediately rose to Jasper's cheeks, “Or, you know...swimming.”
Wes shrugged it off. “We have all summer to swim. I've already booked our stops. We're taking a little tour of our home-state and hitting up every haunted dive within driving distance this weekend! So you'd better run it by your parents ASAP.”
Jasper was definitely surprised but nothing about Wes' idea sounded the least bit romantic. “Let me re-frame this for you. We're finally getting a weekend alone together and every night we'll be focusing on ghosts?”
“I love ghosts. You love ghosts. What could be more perfect?” Wes looked at Jasper as though he'd traded bodies with someone else.
Dreams of underwater sexy-times and sandy beach bums immediately dissipated from Jasper's mind. They were now replaced by cheesy tourist attractions and haunted hotel rooms. At least there would still be a hotel room involved. Maybe. Hopefully. Perhaps Wes had planned for something romantic in there after all.
“It sounds perfect. I'll run it by them first thing in the morning,” Jasper agreed.
Sucked in by Wes' enthusiasm, Jasper leaned over to steal a kiss.
Triumphant, Wes hopped off the bricks. “We'd better head back inside before the others ask too many questions and find a way to turn this into a packed Mystery Machine adventure.”

Join Wes and Jasper on their next adventure September 9th!  Pre-orders are available now!
Posted by Dez Schwartz at 6:16 AM